​Elstow Manor and Pie-powder courts.
​
These courts used to be held in 'the Green House', now known as "Moot Hall".
For more detail, download the PDFs, below.
​In May 2017, we staged a re-enactment of the Elizabeth Bunyan hearings at Elstow Manor Court.  (The 'actors' were  Scripture Union staff, who were at Moot Hall running their "Lifepath" event for schools.)
Elizabeth was John Bunyan's grandmother. She was brought before the court, on several occasions, for 'breaking the assize of beer or bread' - in either words, she was over-charging customers, giving short measure, or watering the beer down! She was fined one penny on at least three occasions, which may have been embarrassing for her husband, Thomas, as he was a regular member of the court jury. 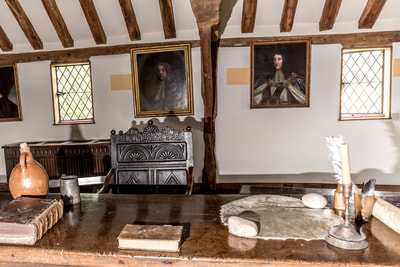 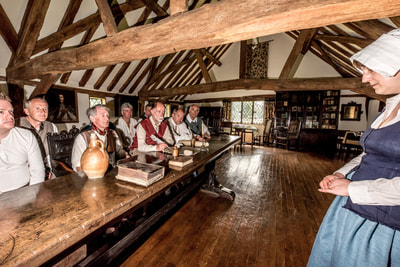 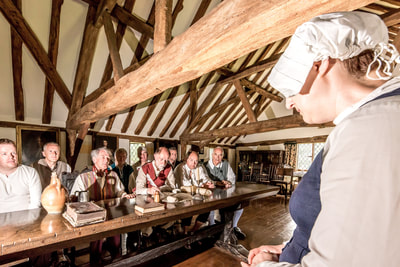 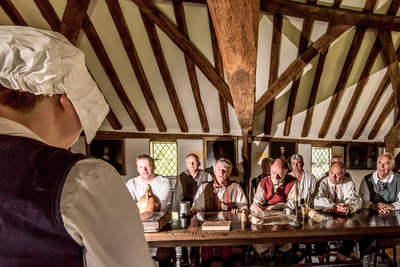 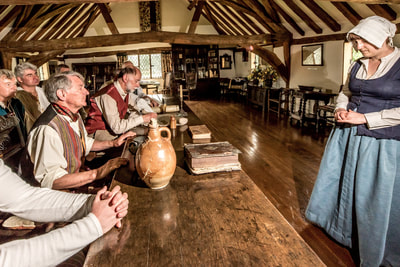 ​History of Moot Hall
Although there are no documents from the time when Moot Hall was first built, experts in timber-framed building believe it is of 15th century design, which means that it was built (and probably extended) in the time before Elstow Abbey was surrendered. Much of what we now 'know' about the place is an accumulation of deductions by various experts in medieval buildings and by historians. The term 'Moot Hall' seems to have been first applied to this building by the Reverend Dr John Brown, in his biography of John Bunyan. Before then, the building appears to have been known as 'The Green House' or 'The Market House'.
More information is contained in the leaflet "moot history" and the 1892 newspaper articles - click on the links, below, to download.
There is also a Moot Hall page in the Bedford Record Office Community pages.

The 1950 Restoration of Moot Hall & The Festival of Britain 1951
In 1950, Simon Whitbread gave Elstow green and Moot Hall to Bedfordshire County Council.

The building was then restored as part of the CC's contribution to the 1951 Festival of Britain.
The most active members of BedsCC's Festival of Britain committee appear to have been the CC's chairman, Sir Thomas Keenes and his clerk Joseph Bramwell Graham, who lived at The Lodge in Elstow.  Two days before the official opening ceremony, Joseph Graham died suddenly. Sir Thomas considered postponing the ceremony but Graham's family said that Joseph would have wanted it to be held as planned.
For more information, download the Curator's briefing.

Also to mark the Festival, Elstow was one of the Bedfordshire villages to be given a commemorative sign, which can still be seen, facing the High Street, in the field to the east of the Abbey church. A photograph of the sign is at the top of our Elstow Picture Archive main page.
To see photographs of the restoration work, and the official Opening of Moot Hall, click on this link; Elstow - Old - Moot Hall page
​ (The "​Restoration in 1950" Album is about 2/3rds down that page)

​To view our collection of Old pictures of Moot Hall, click here.
​

To view our Modern pictures of Moot Hall, click here.