ELSTOW, BEDFORDSHIRE
​In the early 1980s, Elstow residents received a great shock when they heard the news that the site of Elstow Storage Depot (ESD)  was being considered for use as a nuclear waste dump. ESD  was  formerly a Royal Ordinance WW2 munitions factory.
Although this large site was a mile or so south of the actual village, the residents were, quite naturally, deeply concerned, as were thousands of people in the surrounding villages and Bedford.  Other sites - in Essex, Lincolnshire and Humberside - were also being considered but that was of little consolation to the people of Elstow. It seemed that, having gotten rid of its munitions factory, Elstow might again become a potentially dangerous place to live.

Britain's low-level radioactive waste was being stored at a site in Cumbria but that facility was becoming full so, in 1982, the Nuclear Industry Radioactive Waste Executive (NIREX) was set up by British Nuclear Fuels, the Central Electricity Generating Board, the South of Scotland Electricity Board and the United Kingdom Atomic Energy Authority.  Nirex was given the responsibility for managing the disposal of most of the UK's solid low and intermediate levels of radioactive waste.

In 1986, the government used a Special Development Order to give planning permission for a detailed investigation of each of the suggested possible sites for a new waste facility. Any application to develop such a site would trigger a full public enquiry.

Nirex had guidelines to minimise the risk any adverse impacts that a nuclear dump would have at the chosen site. One of these guidelines stipulated that there should be no more than 100,000 people within a five mile radius of the site. (The Elstow site had a population of 120,000 within the 5 mile radius, yet was still being considered!

Just the possibility of such a facility being built here had an adverse effect on house sales in the village, as no-one wanted to live anywhere near the site of a possible nuclear dump.

In 1985, Nirex flew three Elstow residents, one from Wilstead and one from Houghton Conquest to La Hague in France, where Europe's only similar nuclear waste facility was sited, so that they could see how such a site operated. One big difference was noted - the area around the La Hague site was largely unpopulated, whereas Elstow Storage Depot was close to a densely populated area.

In March 1986, a petition of 9500 signatures was given to Sir Nicholas Lyell QC MP and was then presented to the House of Commons. In addition, protestors barred the way into the ESD site, by day and by night.  A commemorative stone was erected at 'Chimney corner' - beside the B530 entrance on the eastern side of the ESD site.  (This monument was later moved, when the road into the site was re-aligned. Elstow Craft Centre displayed a "Funeral Parlour" in Bedford Corn Exchange, which included a stained glass window by ECC teacher Norma Wall and a lace skull, made by Elstow resident Sandra King. (See pictures at the top of this article.) In 1985, BAND organised an ironically-named "Family Fun Day" - see programme download, below.

Nirex had decided that a safe near-surface disposal facility could be developed at any of the proposed sites but were advised that it would be preferable to develop a multi-purpose deep site, for both low and intermediate radioactive waste.  Studies then suggested that a deep mine or under-sea facility might be a preferred option and Nirex (to the great relief of the people of Elstow and the surrounding area) eventually abandoned the idea of using any of the four sites originally proposed.

Elstow Storage depot then became available for development.  To enable that to happen, another form of potentially dangerous waste had to be removed from the site; large amounts of soil  contaminated by chemicals when the site had been a vast munitions factory, had to be removed.  The whole of the former ESD site will now  become occupied by the Wixams villages. 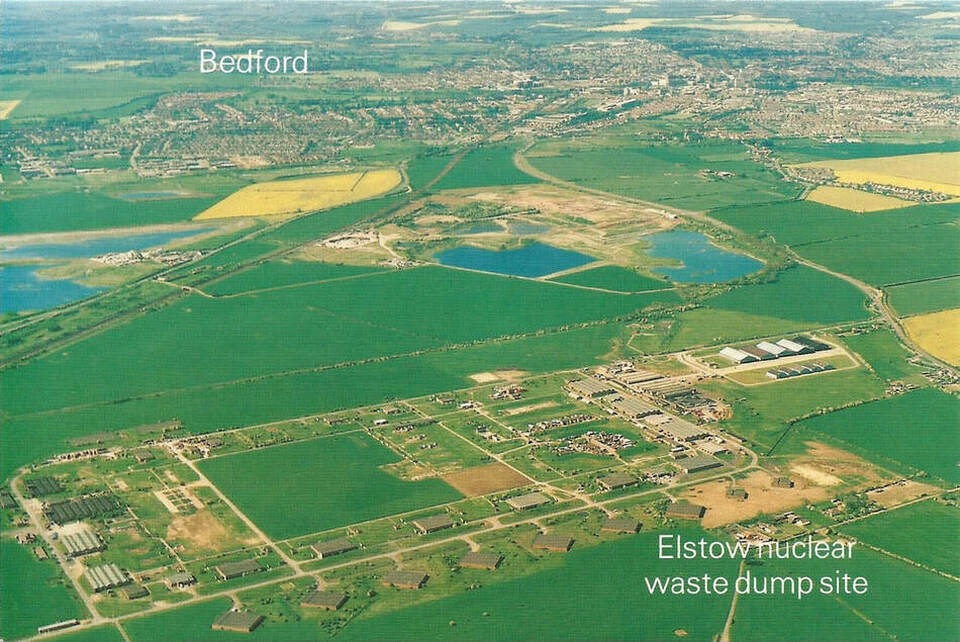 Elstow Royal Odinance factory - Storage Depot - Proposed Nuclear Dump - Wixams
This photograph was taken in the 1980s and views the site from the south.
Elstow Storage Depot is the rectangular plot in the foreground, with its military style gridwork system of roads.
On the left, is the western entrance road, leading from the B530. On the right, is the eastern exit, leading out onto the A6.
​The two sets of lakes are former quarries, from which the London Brick company extracted clay to make their famous LBC bricks.
Elstow village is north-east of the lakes, on the right of this photo. On the left is Kempston town and, north of both of them is Bedford .

The buildings within ESD site are what remain of the former Royal Ordnance Factory (ROF), where munitions were amde in WW2.  As well as the larger storage buildings, you will notice that the site also contains many small buildings.  It was in those that the explosives were packed into munition cases - doing this in tiny buildings minimised the risk of damage to the rest of the facility in the event of an accidental explosion.

The Elstow Storage Depot, at the time of the Nirex proposal, was in use as a commercial site, housing warehouses selling inexpensive furniture and other discount goods.  It also housed a few small engineering companies. Access was only from the western gate, which still had a security gate and, even before the Nirex proposal, one had to explain to the guards there one's purpose for visiting the site - which seemed a bizarre thing to have to do when going to purchase a new sofa! For some years, one could exit the site using the eastern road.  This exit, strangely, had no security guards, so all that stopped anyone entering freely from that direction was the fact that the road was signed as one-way!  This road later became swallowed up by the northernmost Wixams village and is now leads into an industrial estate.  The A6 was re-aligned eastwards, and the old road is now a link road within N Wixams.