​Buildings
Bunyan Christian Fellowship and some history of Education in Elstow
In the 19th century, Bedford's Bunyan Meeting church set up a number of chapels, both in Bedford and surrounding villages, to serve local populations.  These were located at:
Biddenham, Blumham, Cardington, Cotton End, Fenlake, Gamlingay, Goldington, Harrowden, Oakley, Renhold, Stagsden.  During the 1980s-1990s, each of these branch churches closed, except for the one at Elstow.

An Elstow Sunday School was started in 1811, by Thomas Green and John Brashier, in a cottage just north of the Red Lion pub.  The Sunday school attendance grew so that, in 1817, it moved into Moot hall (which, at that time, was still known as the 'Green House'). By 1871, there were 11 teachers and 114 scholars, 20 of whom were aged 15 or over. There was a library of 120 volumes. In 1882, there were 10 teachers, 120 scholars, 96 of whom subscribed to a Clothing Club.
Sunday school superintendants: Thomas Green until 1829; John Hutchings (who then went to be a missionary in Jamaica)  Abraham Smith until 1839; William Wells Kilpin (mayor of Bedford in 1856); Thomas Carling 1857-1871; WJ Robinson 1872-1890; 1890-1927 RH Poynter & W Cirket; from 1927 PW Townsend. There were nine other teachers, including Frank and Sidney Pestell.
An average of 97 children attended each Sunday morning and afternoon. Girls were taught upstairs, boys downstairs.

The Elstow chapel was set up in about 1812, based in Moot Hall. The larger upstairs room was opened for preaching, and SS teaching, in 1846. Records of attendances at Bedford churches show that the Elstow Bunyan Chapel's services of evening worship regularly attracted congregations that were larger than those of the nearby Anglican Abbey church. (John Bunyan would, no doubt, have been pleased to see this!)
As early as 1863, a young women's bible class was flourishing.

In the 1870s, an appeal was launched for the erection of a Bunyan Memorial Church. T Mercer drew a design for it in the Vistorian classic style. Although some funds were collected, the project was abandoned because of the difficulty of getting ground on which to build.  In 1878, the trustees decided to spend the funds on preserving and substantially restoring the Green house. (Photographs from the late 1800s show the Green house looking somewhat shabby on the outside so, presumably, these funds were mainly spent on the interior.)

In 1880, TH Phillips of Kempston was given oversight of Elstow and Kempston Bunyan Meetings.

In 1906, a Band of Hope register was set up by Dora Pestell and Maud Cirket. (I am currently researched this so, hopefully, will be able to add more information here soon.)

During the Rev. W Charter Piggott's ministry, Samuel Whitbread presented a site and new plans were drawn up for building a Bunyan Memorial Hall. This version is a pleasing half-timbered design, in great contrast to the 1874 version.
On May 19th 1910, the foundation stone was laid and the hall was opened on 27th October. Dr John Brown, Mr Piggott, RH Poyter and EP Rose were present. EP Rose presented a large stained glass window, which was unveiled by TE Rose.
On Friday 28th October, RH Poyter gave a tea in the new hall for the scholars and teachers of Elstow Sunday School and each scholar received a copy of The Pilgrim's Progress.  A photograph, probably taken at that event shows a membership of almost 100 children and 28 adults - presumably teachers and / or parents. (See Photo, below.)

In June 1911, the centenary of the Elstow Sunday School was celebrated.

In 1927, Mrs Roberts presented the church with a reading desk and vases.
In 1929, Frank Cirket presented wooden rails to enclose the communion table and chairs. The National Sunday School Union presented Long Service Diplomas to: Mrs RH Poynter - for 52 years of Sunday School work; WA Cirket for 46 years; John Wells for 25 years. The cause of Bunyan Meeting Elstow owes much to thye devotion of families such as the Poynters, Cirkets, Pestells, Wells and Steel.  Mrs Poynter died in 1940 and WA Cirket in 1945.

Activities at Elstow included a Cricket club, a Girls' Brigade Company and a weekly fellowship meeting.  The Sunday School continued to flourish under the leadership of PW Townsend.

During most of the 1800s, a National School was run at Moot Hall.
There was also a night school operating there, probably for young people who were working during the daytime.

There was also the possibility of gaining a scholarship to one of Bedford's Harper Trust schools. A scholarship could be gained by passing an examination, set by the Trust. (This was superseded after 1944 when the establishment of state grammar schools brought about the introduction of the controversial 11 -plus exam.)

Following the 1870 Education act, a Board School was set up in Elstow and, in 1873, a purpose-built school, located at the northern end of Elstow's High Street,was opened. The first headmaster of Elstow school was Thomas James.  He served from 1873 to 1921. Mr James was succeeded by Robert ('Bob') Wadsworth, who served until 1949. Mr Wadsworth was a very strict headmaster but was, in several ways, an innovative man, ahead of his time, for he: introduced school meals long before they became universal;  ran an experiment in agricultural education - the school had an allotment plot on the west side of Elstow high Street, where Bob taught pupils how to cultivate the soil and grow crops.
​But Bob Wadsworth is probably best known for reviving Elstow's May Festival. in 1925.  He can be seen in many of the photographs in our 1920s to  1949 May Festival photo albums.

​Other assorted pieces of historical information
The content of each item should, hopefully, be fairly obvious from its file name.
​If not, click it anyway and see what you discover!​ 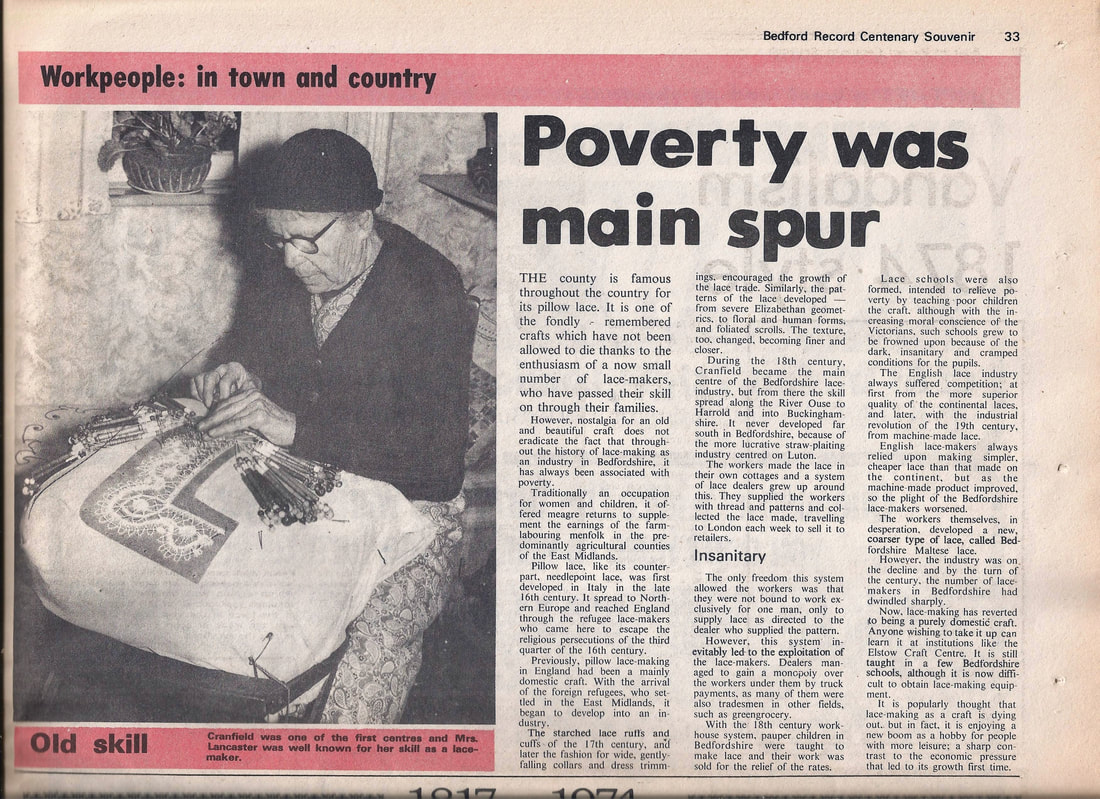 ​For an album of lace-makers' photographs click here - to go to the 'Old Elstow' album in our Picture Archive - the 'Lacemakers' section is about half way down that page.
​
​People